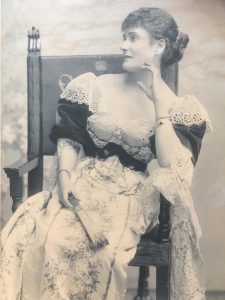 Silvia attended the Acadamy of Dramatic Art (ADA), most likely from September 1911.   The ADA was founded in 1904 by Herbert Beerbohm Tree (1852-1917), a well-known Actor & Theatre Manager.  In 1920 the Academy was granted a Royal charter (RADA) and the following year it moved round the corner from Gower Street in Bloomsbury to Malet St.

The theatrical profession was considered highly unsuitable for ‘respectable’ young ladies.   Inevitably, her mother disapproved, as others probably did too.   Silvia, however, was determined and set off for London.  She lived in a hostel in Holborn for 14 shillings a week – all inclusive.  Initially, to pay her way, she used her childhood savings which amounted to £13.  She describes the hostel as being an austere high Church institution and quite the opposite to the dynamic atmosphere of the Drama School.

After the Academy, Silvia records that she joined a repertory company in Edinburgh but there are no details of this period and no other references to acting in Scotland.   Maybe she had a brief spell there and then moved to Bristol for which information is available.

The Bristol productions took place for the duration of a week and were advertised on a community news sheet.  Programmes for this period were quite simple and did not supply the wealth of information that we take for granted in modern programmes.   Muriel Pratt was the producer but she had no capital of her own and had to operate on a week by week basis – it was a precarious business. Unfortunately, following the outbreak of WW1, audience attendance declined with the result that the money ran out by the end of 2014.

Although Bristol is not mentioned in her journals, Silvia states that she went from repertory work to the Old Vic -for a while her Bristol performances overlapped with her work in London.

In 1914 Lilian Baylis, following the death of her Aunt, took over the Royal Victoria Hall, affectionately known as the Old Vic.   Baylis focussed on Shakespeare productions.   Ben Greet became her influential Producer and Robert Atkins the Stage Manager.   During WW1 the conditions were pretty difficult and the audiences were often very small.   Male parts were frequently allocated to women because there was a shortage of actors as so many enlisted for the war – some of whom never returned…

Most of the actors shared roles and, in half the plays, Silvia shared with someone called Katherine Carew.   Sibyl Thorndike was a fellow actress in eleven of the performances that included Silvia.   In her journal Silvia admits, with particular reference to A Midsummer’s Nights Dream, that to play in Shakespearean love scenes with someone you happen to be in love with is an experience one doesn’t forget!    Except for Dusk, she is known as Sylvia Fausset when acting.

A disturbing backdrop for Silvia at this time would have been the 1916 Easter Uprising in Dublin where her Baker relations lived.   Her Aunt Anna later wrote an alarming account of sniper activity in and around Merrion Square where she and her family lived.

We can only surmise as to why Silvia gave up acting in favour of art school but one reason she gives is that Ralph Hodgson (a poet who she met in 1916) helped her to understand that drawing was just as much a vehicle for emotion as acting.  He also persuaded her that there was more opportunity in art for women when they became older than there was in acting.  Interestingly, I have a copy of a letter written by Hodgson’s nephew, in which he suggests that Ralph did his best to save young actresses if they had talent (other than acting) and tried to take possession of it as if it was his personal property.

Details available in the University of Bristol Theatre Collection