According to her journal (JY), Silvia met Paul and his wife Margaret – known as Bunty – at a dinner party in 1914. As the Nash’s were married in December 1914, it must have been a Christmas party of some sort (maybe hosted by the Rutherston’s who were mutual friends?). She was struck by Bunty’s dark beauty which always made her think of ‘pomegranates’. Paul and Silvia had both lost a parent when they were growing up and their respective brothers had both been to Wellington College.

Silvia received at least three amorous letters from Paul; maybe there were more, as it seems they knew each other quite well! The letters were written during WW1 and reflect Paul’s attraction to ‘strong and unusual women’.*

This letter is transcribed in full – below. It was probably written in 1917, on a Tuesday, just before being sent to the Western Front with the Hampshire Regiment. By then, Silvia would have had the workshop which is mentioned, having started at the Slade the previous September. The original was written in black pen on light blue paper. It was sent from the family home – Wood Lane House, Iver Heath, Bucks.

Beautiful and mischievous Sylvia it is within the bounds of possibility that I shall be free and at large in the vicinity of Chelsea on Friday at lunch time. In which case I shall most certainly call on you at your workshop and prevail upon you to come out and lunch with me.

Then will we tread the enchanted streets of haunted Chelsea as far as the Embankment and dally – with the wholly inadequate food of the Blue Cocatoo (sic) while your distracting eyes encourage me to say all those things so much better embodied only in thought. Bunty gives me leave of absence since she is sitting on a committee or something at that time so unless unlikely things happen please expect me. I feel this drawing bears little resemblance to you but you can see by the earnestness of its line how ideally I have drawn.

PS tomorrow is Valentine’s Day may you have good luck. Remember Ophelia and beware of early morning callers of the other sex.

(At side of letter) We return to town on Thursday. 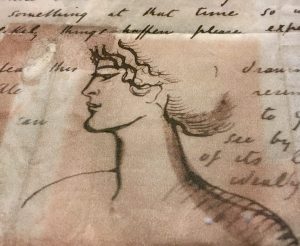 This will have been written between February 1917 (when Paul was posted to France) and 25th May 1917 (when he fell into a trench, broke some ribs and was invalided back to London). He gives a BEF address – 15th Hants, 41st Division. It is written on cream paper in pencil but the opening page is missing.

Paul describes Silvia as a ‘beautiful goddess’. Evidently, she had told him about a burglar haunted bedroom and this inspired Paul to sketch a rough drawing (to one side of the page) supposedly of her caught out, in a corset, by the burglar!

He asks her to write again whenever she has time and inclination, adding ‘you can’t think how exciting letters are out here’. He then asks her to visit (and take out) Bunty as she is feeling an emptiness and is cut off from ‘the few friends I have to share with her’. He suggests Silvia introduces her to ‘amusing folk – you know so many – you would be doing a real kindness and Paul would be deeply grateful’. It is interesting to surmise from this letter that Silvia had a wide circle of friends.

This was sent from Tubbs Farm, Chalfont St Peter where Paul and his artistic younger brother, John, had set up a studio in 1918. It is here that they painted many of their WW1 paintings. The letter is written on dark blue paper in black pen.

Paul seems to be captivated by ‘My white and golden Sylvia’ who has gone off to some ‘abandoned resort’ with ‘gloomy pines’ and ‘pavillion bands’ – ‘O queen return to your subjects who are listless without you’.   He imagines her pacing ‘the hot parade, her pale curved cheeks almost flushed by the sea wind which presses against her as she walks modelling her skirts to her form … the essence of a dream’.

This is accompanied by a striking full page sketch of Silvia, described as ‘a goddess in exile’. It was, subsequently, reproduced in Journey to Life.  The letter closes with a ‘Goodbye – my love and devotion to you.  A kiss for the whitest throat on God’s earth. 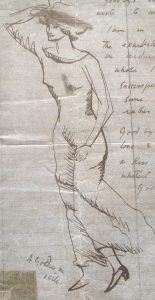 Reference is also made to an exhibition which is about to close. Paul writes ‘on the whole I suppose it was successful, but in some ways I am rather disappointed’.

This could have been:

This letter has been included because it was written around the same time as Nash’s third letter and, similarly, bemoans the fact that Silvia has disappeared without explanation, to what Paul describes as an ‘abandoned resort’.

It is addressed to Miss Baker from an admirer who is upset that ‘you did not look me up before you went away and so disappointed me… but better for you to be a mermaid by the sea’.

It seems he was the English teacher at the school where Silvia taught elocution once a week. He lived at 1 Wellesley Road in Sutton (not far from where her mother was then living) but his signature is illegible. The ‘girls’ were very disappointed that Silvia had departed and, in her absence, he was having to take their poetry lessons. He closes his letter in verse:

One wonders what crisis – or who – caused Silvia, then aged 24, to retreat to the coast for solace; or was it for some other reason…?

The Blue Cockatoo is mentioned in Paul’s first letter. It was opened in 1914, on the corner of Cheyne Walk (no 35) and Oakley Street in Chelsea . It became a pivotal meeting point for artists, poets, literati, musicians, dancers, actors and others who represented British culture during WW1, through until WW2. It continued as a restaurant until the 1960’s when, along with surrounding buildings, it was demolished and replaced by flats.